Home construction in the metro Milwaukee area enjoyed its best year in 2018 since the Great Recession, fueled by a strong economy and slimmer pickings in the used-home market.

Although single-family homes and duplexes didn’t go up at the rapid pace of the early 2000s, it was the best showing since 1,683 building permits were issued in the four counties in 2007.

Oconomowoc recorded the most permits for new homes with 95, up from 63 in 2017. Among other popular spots for new home construction last year were Menomonee Falls, Waukesha, New Berlin, Mequon, Summit and Sussex, according to MTD. 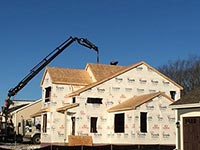 “There’s more and more new developments and subdivisions going up because developers’ confidence is there because of the economic conditions,” said David Roembke, vice president of sales and co-owner of Germantown-based The Victory Companies, which is the parent company of Victory Homes of Wisconsin and Allan Builders. “There’s more opportunity and options for people to build in places that you haven’t seen in the past.”

The price of new homes has been driven up by the costs of labor, lumber and lots, making it economically challenging to build houses in the in-demand $300,000 or less market, builders say. Many of the new homes that went up in suburban Milwaukee in 2018 cost at least $400,000.

The cost of lumber has stabilized, Roembke said, but skilled labor has been hard to find. Many experienced tradespeople permanently left the home construction business during the housing crisis that was part of the Great Recession.

“Labor, because of supply and demand, these guys are getting top dollar now in the trades, as they should,” Roembke said. “They are good at what they do, and in order to keep them busy and keep them working for you as a builder, you pay them. You keep it in line, but the costs have gone up significantly.”

Roembke, whose company mostly constructs high-end houses, said when home shoppers can’t find exactly what they want in the existing market and weigh the costs of buying a used house and renovating it, more of them have been choosing to build new instead.

“I think the existing (home) market is just not offering enough benefit and features for the value,” he said. “So we see a lot of people choosing therefore to build.”

Roembke said he thinks homebuilding will grow further in 2019.

Roembke, a member of the Metropolitan Builders Association, said the organization’s recent annual Home Building & Remodeling Show at State Fair Park in West Allis was a big success, which bodes well for the new year. The show generated more leads than normal, he said.

“When you have people coming to you with lots and looking for builders, those are good signs — those are really good signs,” Roembke said.